When Robert and I got married in May of 2011, we decided to stay an extra day on the west coast of Vancouver Island to explore a famous trail on Meares Island. We didn’t realize when we caught the water taxi out of Tofino what a challenge we would face. Originally published: previous website, October 2016.

Photos and text by Faye Bayko

In March this year TV Ontario aired a documentary on the Clayoquot Sound, as part of their new series, Striking Balance. The series which examines the health of our nation’s biosphere reserves. For Robert and I the episode on the Clayoquot Sound brought a new point of view to a trip we had previously filed in our travel log as a big mistake.

We had visited the Pacific Rim National Park Reserve several times before our May 2011 trip and enjoyed the beauty of the beaches but we had never gone into the surrounding woods. That changed the Tuesday following our long-weekend wedding celebration on Chesterman Beach. After packing up, Robert and I weren’t ready to leave what we often referred to as our spiritual home and decided to extend our stay at least until the end of the day. We drove into Tofino and hired a water taxi to take us to Meares Island. We figured walking the Big Tree Tail would be a fitting representation of our new life together. I had done a quick Google search of the trail and was reassured that the trail was well used and had a boardwalk, making it usable for sight-challenged Robert, or so I thought.

When the driver cut the engine and turned the water taxi in to nudge a rocky beach, I knew I was in trouble. I had not realized there would be no dock at the trailhead. I looked back at Robert and explained the situation.  We would have to jump out of the boat and walk to the beach through the shallow surf. He was not thrilled. Neither of us were wearing hiking boot.  We would be starting out walk in the woods with soaked shoes. This was not the casual afternoon walk in the woods we had envisioned over a blissful post-wedding breakfast.

A walk in the woods

Wet feet proved only the first of several challenges. As the water taxi pulled away from the beach to leave us to explore our new environment, I realized our second problem. I could see where the boardwalk bridged a gully at the forest’s edge but could not see where that boardwalk began. We would have to climb up to the bridge, which meant I would have to describe the route as we went in order for Robert to negotiate it.

The scramble up to the boardwalk was steep, muddy and frustrating. My difficulty in describing the terrain combined with Robert’s resistance to being told what to do, did nothing to make the experience a good one. My relief at reaching the top was short lived as I looked at how the boardwalk was constructed. The underlying poles on which the boardwalk planks were nailed were set very close together. This meant that Robert, as a big man, would have to walk one foot directly in front of the other so that he didn’t place any weight on the part of the plank overhanging the outside of each log, popping the plank off the log, and tripping himself. After explaining this to Robert, we started walking.

Whether it was the rain or the time of year, we were alone on the trail for most of the two hours we traveled it. This proved to be an advantage because it allowed Robert to take his time to negotiate the boardwalk and understand the environment he was in.

“It was mind boggling. I’d seen pictures of tall trees and I’d been among what I’d thought were large trees in North Vancouver, but they hadn’t prepared me for the size and majesty of the trees on the trail,” Robert explained when we discussed the trip later. “Just to be standing beside these massive living things!”

I didn’t get much of an opportunity to enjoy the environment as I was busy anticipating and describing the hazards or missing planks, fallen trees, or impossibly narrow and steep staircases. But, as it turned out, the Big Tree Trail was only boardwalked for approximately 1.2 kilometres. The trail became one of dirt by the hanging garden tree. This provided us with a natural turn-around point without making us feel we were cheating by not completing the whole trail.

Down a slippery slope

When the water taxi arrived to pick us up, we were waiting on the beach he had dropped us off at. He coasted right past us and pulled up against an outcropping of rocks at the far side of the beach. When the driver jumped out of his boat and called us over, my heart jumped to my throat. The rocks where the driver was standing were wet and covered in moss. They would be tricky to negotiate for me but dangerous for Robert.

I tried explaining to the driver that Robert was legally blind but because Robert is very good at faking his ability to see, the driver didn’t seem to believe me. I edged past the driver, trying to keep from slipping down the steep bank of rocks into the water, then reached back to take Robert’s hand, describing where to best place his feet. When Robert had successfully squeezed by the driver, I started stepping gingerly down the rocks toward the boat, taking great care to describe where I wanted Robert to place his feet. Because it was cloudy and a fresh rain had fallen, there were no shadows and very little colour contrast to assist Robert.

As Robert made his first tentative steps, he let go of my hand to balance better, he said. The driver, who finally clued in, started to assist Robert by adding his own instructions. I took the opportunity to turn toward the boat so I could see where I was going. The tension in my legs at trying to stay balanced on the rocks was hard to maintain but I finally made to a place where I felt I could step into the boat. My toe caught the lip of the bow as it rose with a wave and I fell hard in to the boat, my camera slamming down beside me. Biting back tears, I shushed the concern expressed by Robert and the driver and quickly slid out of the way so Robert could attempt to come aboard. With surprising grace, he did so, followed quickly by the driver. I nursed a bruised shin and ego on the way back to Tofino, from which we left for our journey home to Calgary.

War of the Woods

Robert and I, prior to meeting in 2007, had each heard of the Meares Island protests but neither of us had understood the historical importance of those events until watching the TVO series, nor did we know how those events would impact us so many years afterward. If the Tla-o-qui-aht First Nation people hadn’t blocked McMillan Bloedel loggers from landing on Meares Island in 1984; if Moses Martin, chief at the time, hadn’t declared the area a tribal park; and if hundreds of supporters hadn’t risked arrest to join in the 1993 War in the Woods; the Big Tree Tail, and others like it, would not exist.

Knowing the history, as told through the documentary, Striking Balance, has allowed Robert and I to appreciate the efforts made by so many people in order to provide the opportunity we had to walk in the woods that day in May 2011. While there is a need for jobs and wood products, there is a magic in the ability to touch and smell a living old-growth rainforest that cannot be downplayed.

The challenge of accessibility

With the construction of a better boardwalk, and maybe a proper pier, the Big Tree Tail could be made accessible to those with sight challenges. The trail offers a sensory experience that goes beyond its visual beauty and could thus be enjoyed by people of all abilities. However, by making these improvements there is a danger of taking away the magical quality that the roughness brings to the experience for the sighted. There is a faerie-forest quality that exists with a broken, twisted, boardwalk that plays peek-a-boo with the forest it was created from that would die with the installation of a wide, chemically-treated plank, all-access boardwalk. Maybe there is a way of providing both experiences: keep the wild trail but add a small, all-access trail on the side. 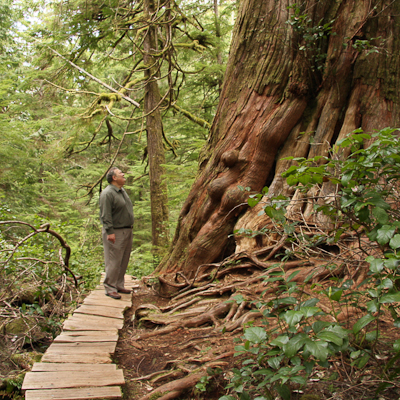 Faye Bayko
I am a writer and photographer currently working out of Vancouver, BC.